A Look Back At Ritch’s/Superior of Windsor Locks, Connecticut

The first three seasons saw 31 championships out of 40 tournaments. There were four seconds, two thirds, and a tie for fifth, seventh and ninth.

Frank LaTeano, the Superior half of the co-sponsorship, called the 1993 team the best. “We just seemed to do everything right,” he said. . . . until the final tournament. The ’93 team won its first nine tournaments, then placed third in the last regular-season tournament (Sterling Heights, Mich.) The final count that year: 12 championships in 14 tournaments. The ’93 team, which was undefeated in Grand Slam play until the USSSA, included Charles Wright, Cecil Whitehead, Doug Roberson, Ron Parnell, Darrell Beeler, Britt Hightower, Dirk Androff, Dave Steffen, Jimmy and Tot Powers, Paul Drilling, Rick Weiterman and Dennis Graser. Roberson, Parnell, Beeler, Androff and Weiterman played for R/S from 1991 through 1997.

Androff died on an exercise bike the fall of 1997. Louisville Slugger had elected to merge R-S and Shen Valley into Team TPS for the 1998 season.

Composite stats for the first three seasons saw Androff compile a .751 average with 449 home runs compared to .727 and 469 HRs for Wright. Beeler and Hightower each had 381 homers, Steffen and Parnell 366 each and Roberson 351. For the three seasons, Steffen batted .689, Beeler .685 and Hightower 684. That’s what you call a balanced attack.

Over seven seasons, the R/S Express, in addition to winning 68 tournaments, finished second 14 times, including five times in the Grand Slam championship play. The first five years saw a 376-48 record, with 50 championships and seven runners-up out of 71 tournaments.

Coy Honeycutt, out of North Carolina, was the other original co-sponsor. Then came Bill Copeland, Andy Beloli and Gothrie Short. Honeycutt once made this comment: “I’d be a millionaire if I had back all the money I’ve spent on softball and women.” His Ritch’s team, with Whitehead, Hightower, Drilling and Wright, beat LaTeano’s Superior club, with Roberson, Parnell, Beeler, Graser and Steffen, in the finals of the 1990 USSSA World Series at Greensboro, N.C. Steele’s Silver Bullets won the first three legs of the Grand Slam that year, but was upset by Sports Hero’s of Minnesota and Bell Corp. in the USSSA World Series.

The R-S Express tied a record by winning three consecutive Smoky Mountain Classic crowns (1993-95). Beeler, Hightower and Androff were the MVPs. Hightower was the MVP of three consecutive tournaments, starting with that MVP award in the 1994 Smoky. That’s quite an accomplishment this day and time in the major ranks. R-S won the Smoky again in 1997, with Nevitt earning co-MVP honors. That was the year that Rusty Bumgardner set a record with 30 HRs for runner-up Shen Valley.

In 1989, Ritch’s won the ASA Super and Major titles, while Superior won the USSSA World Series. That was the year that Steffen hit a record nine home runs in one game. The last one was an inside-the-park job.

Honeycutt, who has been out of the game since 1993, accumulated 13 championships, topping the record of 12 by Richard Howard’s teams. LaTeano’s title total has climbed to 19. “Frank’s obsessed,” Honeycutt once remarked. LaTeano will be with the Easton-backed Chase powerhouse in 1999. Both LaTeano and Honeycutt think that the 1993 R/S team was the best of all time. “Howard’s had a great team in 1981, but this team is the best,” Honeycutt said at the time.” LaTeano echoed the statement: “The best team ever.” Not too many people will argue that fact, especially if you are talking about the best team over three years (1991-93), or five years (1991-95), or seven years (1991-97). 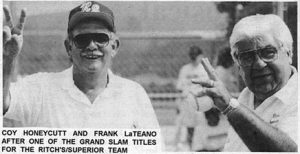 Ritch’s/Superior’s Coy Honeycutt (left) and Frank LaTeano after one of the team’s championships in 1993. 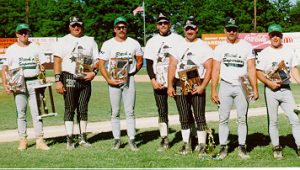 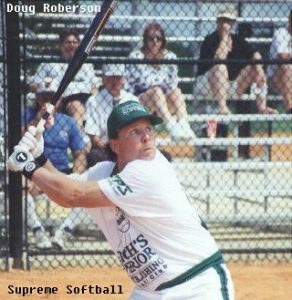 Britt Hightower . . . a most valuable player who has never been the MVP in a national tournament . . . he was, however, the MVP for Ritch’s/Superior in the 1994 Smoky Mountain Classic . . . and he earned four season All-Star honors in a row. 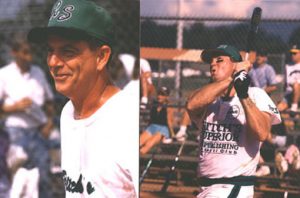 Buddy Slater, R-S manager, smiles after a dip from the cooler after a tournament championship; Charles Wright follows through on another home run. 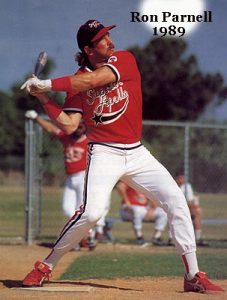 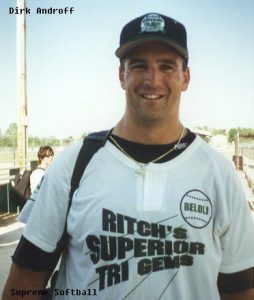 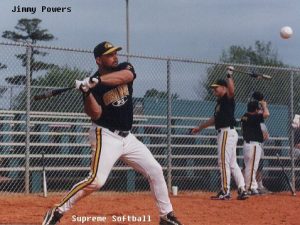 Jimmy Powers (shown in a Shen Valley uniform) and his brother, Tot, played for Ritch’s/Superior in 1993. Frank LaTeano calls the ’93 team the best for the R/S Express. 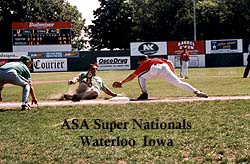 Big Mike not only hit, he could run and slide. This photo was in the 1995 ASA Super Nationals at Waterloo, Iowa. 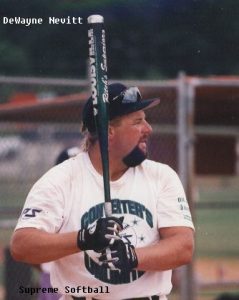 Dewayne Nevitt . . . Kentucky product was the MVP for Ritch’s/Superior in the 1997 ASA Super Nationals. 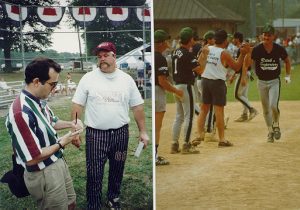 Dave Steffen, being interviewed after Sunbelt/Easton won the 1996 Smoky Mountain Classic, was a two-time national tournament MVP for Ritch’s/Superior — 1992 USSSA and 1993 ISA; Cecil Whitehead goes down the handslapping line with his Ritch’s/Superior/TPS teammates. That’s co-sponsor Coy Honeycutt in the tank top and shorts, in the line with coach John Imlay and manager Buddy Slater.