2020 held at Melbourne, Florida at Space Coast Complex on October 1-2.

MPT Rentals knocked off T’s 13 in the winner’s bracket finals Thursday night by the run rule 21-6 using incredible defense and pitching to shut T’s down.  Then on Friday morning T’s 13 came from behind with 16 runs in the bottom of the 6th to beat Cornerstone in the loser’s finals and advance to the championship.  In the championship MPT Rentals broke open a close game with a grand slam in the 5th and went on to win the ‘B’ Worlds 19-14 closing out the 7th inning with an incredible diving catch by the right fielder Christensen.  CGR was 4th.

USSSA B ALL TOURNAMENT TEAM

2020 held at Melbourne, Florida at Space Coast Complex on October 2-3.

SportsReach/Crunchtime/H&H/Grizzy rolled through the winner’s bracket but then stumbled in the 1st championship game against PrimeTime/Easton/FAI/Riot/Klutch.  In the “if” necessary game SportsReach offense recovered and run rule PrimeTime 28-13.  PrimeTime lost their 2nd game of the tournament Friday, won a game in the loser’s bracket late Friday night then started play at 8 AM Saturday morning and won 7 straight games with the championship finishing at midnight.  3rd place was WorkSteer/Bell’s LawnCare from North Carolina and 4th was Classic Glass/Easton from California.

2020 held at Melbourne, Florida at Space Coast Complex on October 4-5.

Maroadi/SNI/Easton who was the #11 seed for the USSSA ‘AA’ World tournament knocked off #2 seeded Anarchy/MPT Rentals Sunday night in a dramatic come from behind win after trailing 19-5 in the quarterfinals of the 12 team tournament.  Then they beat 2020 ‘A’ World Champion Sports Reach/Crunchtime/H&H/Grizzy 25-22 on a walk off homer by Justin Lutheran.  On Monday afternoon in the winner’s bracket final they beat Xtreme/Miken/Worth/Athlon 23-21 on a walk off homer by Josh Fyffe.  After Xtreme beat Sports Reach in extra innings 23-22 on a Matt McGowan walk off hit, Maroadis came from behind after being down 22-10 and beat Xtreme on a walk off homer by Eddie Bolden to win the 2020 USSSA ‘AA’ World tournament.

This is the 1st time an ‘A’ team has won the ‘AA’ World since 1989 when ironically Caesar’s Tavern (Maroadi), Jeanette, PA won it as an ‘A’ team.  One of the sponsors on this years winner is the same as the sponsor from 1989 – Hall of Famer Joe Baney.

2020 held at Melbourne, Florida at Space Coast Stadium on October 7-10.

Resmondo knocked off Anarchy/MPT Rentals in the winner’s bracket championship game Friday night 32-31 on a walk off homer by Daniel Cayton and beat them again in the Championship 38-8 in 3 innings to win the 50th Annual USSSA Major World Series.  MPT though put on a show 3 nights in a row as they knocked off the #1 team in the nation Dan Smith on Thursday night in the semifinals and again Saturday night and played Resmondo very close on Friday night.

2020 held at Hall of Fame Stadium in Oklahoma City, Oklahoma on September 6-7.

Tharaldson didn’t waste any time getting on the scoreboard, jumping out to a 5-0 lead as Kye Winter and Jay Hartman each went yard while Chris Munch collected a RBI single. Comatose’s Jacob Stadler, Damon Wegner and Matt Stefanski each homered in the bottom half of the frame to give the home squad a 6-5 lead.

Both teams shut down their opponent in the second inning, with Tharaldson turning a double play to strand two Comatose runners on base. Returning to the plate, a two-run home run by Munch gave Tharaldson a one-run lead before David Bobbitt drove in another run. Comatose posted a six-run third inning for a 12-8 lead, with Zack Wegner sending a two-run shot out of the park.

Tharaldson didn’t let up, pushing across two runs in the fourth and fifth innings while keeping Comatose off the board to tie the ballgame at 12-12 after five innings of play. After a 1-2-3 inning from the Comatose defense, the offense came alive with two outs in the bottom of the sixth inning and scored 10 runs. Highlighted by grand slam shots from Damon Wegner and Robert Guzman, Stefanski and Jacobson also drove home a pair of runs to put Comatose ahead, 22-12, which turned out to be all Comatose needed to secure the National Championship title.

En route to the Championship Game, Tharaldson posted a 25-5 win over Ductech/Monsta Athletics and a 14-11 victory over Program/Worth/JTLLC/3xtreme earlier in the day. Mike Jacobson took home the tournament MVP award, while Chris Olson was named the Batting Champion and Kye Winter the Home Run Champion.

ASA B ALL AMERICANS FIRST TEAM 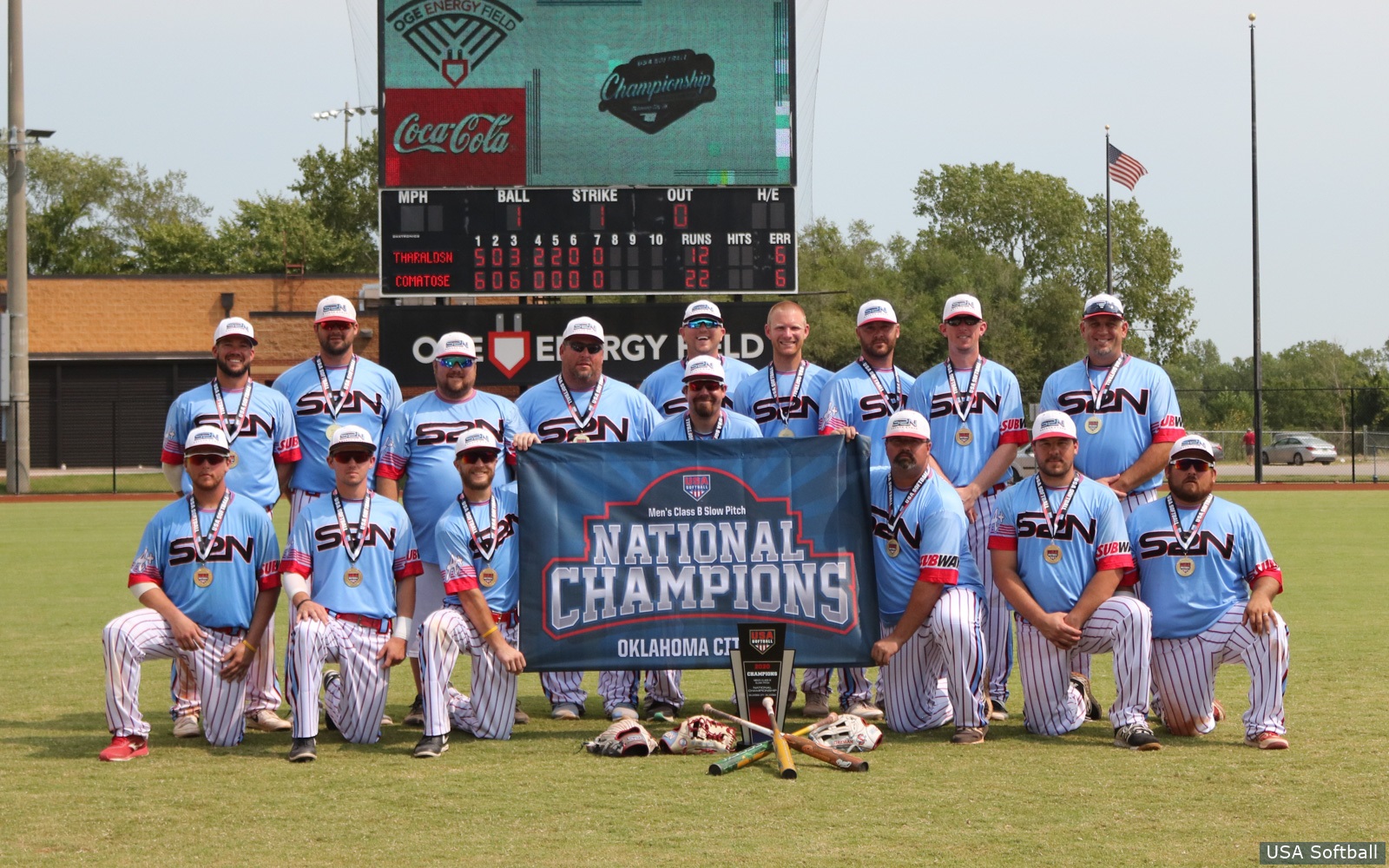 2020 held at Hall of Fame Stadium in Oklahoma City, Oklahoma on September 4-5.

The Championship Game might have started out slow, but it certainly did not end that way as Seminoles/TPS/NACSF.Inc claimed the 2020 USA Softball Men’s Class A Slow Pitch National Championship. The Seminoles went undefeated throughout the tournament, besting Comatose/S2N/Monsta 20-18 in the Championship finale that came down to the last batter.

Comatose jumped out to an early lead, driving in four runs in the top of the first while holding the Seminoles to a zero. Mitchell Dunse and Jim Dreikosen each homered in the first inning to bring the four runners across the plate for Comatose.

The Seminoles nearly returned the favor in the top of the second to Comatose, limiting the visiting team to just one run while driving in five of their own to tie up the game. The offense got started with a leadoff home run by Zane Trammell and an error on the defense allowed the next runner to reach second. A two-run shot by Kyndrich Doggett continued the momentum for the Seminoles with two outs and then another two-run blast from Oliver Odle made it an even 5-5 score.

Another home run from Dreikosen in the top of the third put Comatose on top by one run, but that lead did not last long as the Seminoles put up a run of their own via a Steven Smith homer to tie the game up again at six runs apiece.

Robert Guzman homered with two outs and an RBI single from Brett Wichman put Comatose back up by two runs in the top of the fourth. The game continued to be a nail biter in the bottom of the frame, as a two-run shot by Conner Murray tied up the game for the third time in the contest.

Comatose was kept off the board for the first time in the top of the fifth, giving the Seminoles a chance to take the lead. The home team did just that, driving in two to pull ahead by as many runs. A leadoff home run by Tim Bowser and RBI double from Smith drove in the lone runs of the fifth inning.

Comatose plated three in the top of the sixth and limited the Seminoles to just one to once again tie up the game after six complete innings. Headed into the seventh, the Comatose bats woke up as the team drove in seven runs to take a large lead. Three home runs and a fielder’s choice made a difference for Comatose, as the team went up 18-11 with the Seminoles headed to their final at-bat.

The Seminoles offense also came alive in their final at-bat as the team drove in nine runs for the walk off, 20-18 win. Hunter Ramirez, Smith and Jose Hernandez each homered to bring the game within three runs, and a single and error by the defense kept the offense rolling with two outs. Doggett drove in a run with a single up the middle, and a double by Murray tied up the game. Needing one run to win it all, the Seminoles did that and then some as Odle drove the ball over the left field fence for a two-run bomb to give his team the win.

Murray won MVP accolades after an impressive tournament in which he drove in 11 runs, scored 16 times and blasted four home runs.