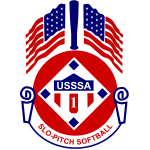 They played this year’s World Series with a 3 game guarantee bracket. Enough Said went out and lost their first two games 10-3 to the Kinder Sharks and 12-8 to the Supersonics. With their backs against the wall, they came back to win five straight games to capture the World Series with a 5-2 record, thus becoming the first Women’s World Series Champ ever with two losses in the tournament. The two losses must have woke them up as the proceeded to win these games: 14-4 over Incognito, 18-8 over Supersonics, 15-0 over Kinder Sharks and then 15-4 and 14-3 over Karphone to win it all.